The Archetype is a prototype Big type megadeus introduced in "Underground Terror", buried amidst the underground subway system of Paradigm City. The unmanned robot lacks the armor and faceplate worn by megadeuses. Several parts of the inner mechanisms are visible. Upon contact with the android Dorothy Wayneright, the Archetype is revealed to be functional and attacks her. Roger Smith summoned Big O to fight it off. The Archetype exhibited incredible agility and flexibility, along with an electromagnetic shock attack from its head that allows it to slowly pull its opponents apart. The Archetype also features prehensile feet that were able to grab and slam Big O onto the ground. It was defeated with Big O's missiles fired from its abdominal area.

The Archetype makes a brief appearance in Roger's dream in "Roger the Wanderer", as a character in a newspaper comic strip. In "Leviathan", it is revealed the Paradigm Corporation salvaged the Archetype, along with the remains of Big Duo, to build Big Duo Inferno.

Archetype has the unique ability to jump or climb on opponents to set up an attack.

When in close range, Archetype can transmit an electric shock through 2 points in its head into an opponent. The shock seems to have a magnetic effect which can immobilize and slowly pull a metallic opponent apart. In the manga, it's revealed to be capable of countering Big O's arc lasers. 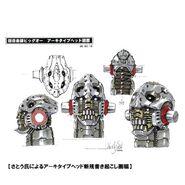