Seen in “The Greatest Villain”.

Beck the Great RX3 was commissioned by Beck, with the purpose of finally defeating Roger and Big O, and constructed by Yoshifura-Yakamoto Industries, in a ploy for lucrative contracts with the Paradigm Corporation.

Piloted by Beck and his two henchmen, Dove and T-Bone, 3 vehicles combine into the giant robot. The combination sequence is started by the command "Final Together" or "Implement Final Formation!"

The megadeus is a pastiche of combiners from the Transformers series, as well as other TV Show mecha such as “Super Sentai”, “Power Rangers” and “Super Robot” series, with an overdone samurai motif covered in kanji. Piloted by Beck and his two henchmen, Dove and T-Bone, three vehicles combine into the giant robot. The combination sequence is started by the command “Implement Final Formation!” or “Final Together”.

Dove’s construction vehicle makes up the upper body, pulling itself up onto the blue lower half. The torso creates hands from a drill and a pincer, much like Getter Robo’s Getter-2 form.

Beck’s sports car jumps off a nearby ramp and dives into a recess in the head to form the cockpit, in a homage to Mazinger Z, completing the sequence.

After this display of bravado, much bragging, and overly-dramatic poses, Roger (having had an inordinately irritating day up to this point) and Big O destroyed the RX3 in a single blast of O Thunder, ending the fight before it could actually start.

The only weapon the RX3 appeared to have was a boomerang-shaped bladed weapon, made by combining the two halves of it stored on the shoulders. When combined, the kanji for “cut” appears on the center of the weapon. 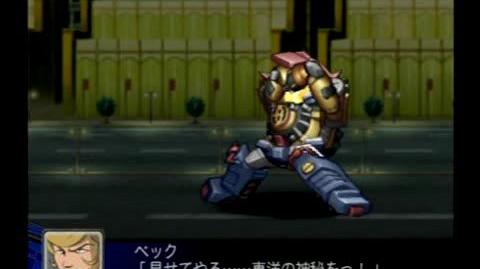 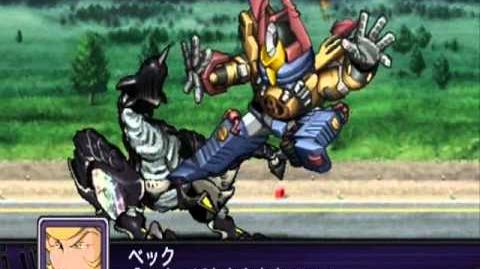 Retrieved from "https://bigo.fandom.com/wiki/Beck_the_Great_RX3?oldid=5526"
Community content is available under CC-BY-SA unless otherwise noted.