Seen in “Enemy Is Another Big!”.

Big Duo is the second Big found in the series, piloted first by Schwarzwald. Schwarzwald planned to use the megadeus to destroy Paradigm, using its flight capability to attack the domes, or "false skies" as he calls them. This was to reveal the truth of 40 years ago

It was found by Schwarzwald in a hangar to the south of Paradigm City, as revealed in a flashback in "Leviathan". Roger is able to defeat Big Duo by hammering it with repeated attacks. However, Big Duo still moves without a head or a pilot, and as a final act it reaches towards Paradigm City's corporate headquarters, suggesting a link with the domes or another potential pilot in the area. It is possible that the semi-sentient megadeus reaches for Paradigm HQ with the intentions of trying to carry out the wishes of Schwarzwald regardless of its defeat and crippling damage. R. Dorothy investigated the nearby area and found traces of Angel's presence.

Big Duo is the only megadeus possessing the ability of flight. Its propeller hands also served as blade weapons. Other armaments included optic lasers, machine guns in its forearms, missile batteries in its chest, and a pair of heavy missiles stored in its knees. The mummy disguise could be used as a bolas/grappling hook. Big Duo was also capable of producing a smoke screen. Due to its great speed and mass, it was effective at using its entire body as a battering ram. The diving punch was equivalent to a piston punch from Big O, and the 2 attacks canceled each other out.

After being defeated, it was salvaged by Alex Rosewater for Big Duo Inferno.

Big Duo first appears wrapped in bandages, much like its pilot. This disguise doubles as an attack which shoots and retrieves the bandages to temporarily immobilize the opponent. It is revealed the spinning fingers are utilized to control the bandages. Alternatively, rapidly spinning the finger rotors would cut off the bandages and allow Big Duo to perform a cutting attack. These bandages are vulnerable to firearms and are burnt off by Big O.

Identical to Big O's eye lasers, this technique is useful as a long range attack and for cutting through objects.

Schwarzwald uses this wall of smoke to make a stealthy and dramatic escape.

Big Duo's most distinguishing feature is its ability to fly. It accomplishes this by spinning its fingers into propellers while the rocket jets in its arms support it from behind. Schwarzwald makes use of the maneuverability of flight for escape and strategic attacks. In the initial clash, it is shown that the propellers were intended for use as melee weapons to cut through armor.

Big Duo can rapidly fire alternating missiles from panels in its chest area. This attack is useful from a distance or to attack an enemy on the ground while in flight.

Its most powerful weapon, Big Duo's megaton missiles are located in its lower leg panels and are shot from its knee area. While very destructive weapons, a drawback is that these missiles can only be fired 1 time before needing to be replenished. 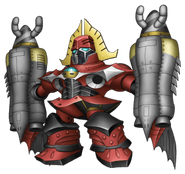 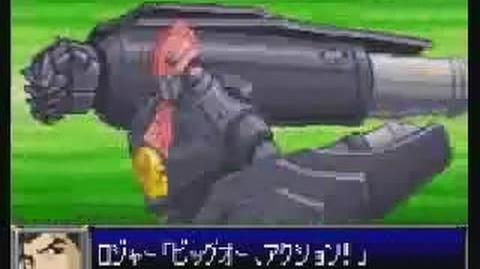 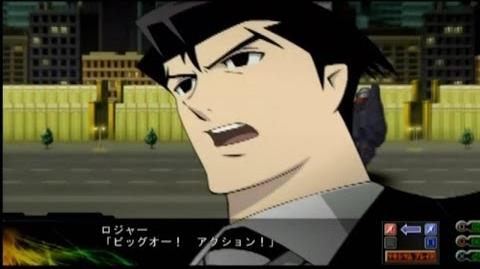