Edit
watch 01:36
We're Getting Mutants in the MCU - The Loop
Do you like this video?
Play Sound

Seen in “Twisted Memories” and “The Big Fight”.

After its defeat at the hands of Big O and Roger Smith, Alex Rosewater gathered up the wreckage Big Duo along with several other mechas Big O had defeated in the past, like the Archetype and the Foreign Megadeus. Big Duo was reconstructed, and then further enhanced and improved upon. Alex then gave Big Duo Inferno to Alan Gabriel to act as both an enemy to Roger Smith and to distract Roger and Big O long enough so he could remove Dorothy's core memory and transfer it to Big Fau. During the fight, Roger was haunted by the memories of Schwarzwald and their previous fights, until he was confronted by Alan Gabriel at the controls, his body directly wired into Big Duo Inferno's controls as a substitute Dominus. The fight was violent and almost ended with Alan's victory, until Big Duo Inferno refused to listen to Alan's commands. Alan was then haunted by Schwarzwald's voice mocking him for trying to control a Megadeus. Supposedly under the control of Schwarzwald's ghost, Big Duo Inferno took off into the air and flew straight up, out of sight, but not before the psychotic Alan Gabriel was killed with a vast array of wires and cables pouring from the control panels. Big Duo Inferno is finally seen flying up into the ceiling of the stage above the City during the last 3 episodes. True to his word, Schwarzwald had exposed one of the greatest secrets the City had to offer, with the help of Big Duo Inferno. Big Duo Inferno finally explodes when it collides with what appears to be a gigantic stage light, miles above Paradigm City.

Much of its head had been replaced by the Archetype's and the entire Megadeus had been painted with a red/white flame scheme. The arms were equipped with improved blade-claws that enabled it to drill, with one of the arms' inner skeleton having come from the Archetype.

The repeating missile launchers in the chest were removed, leaving holes straight through the chest.

The optic lasers were converted from dual beams into a single emitter in the larger left eye. After Roger uses the O Thunder attack to decapitate the megadeus, Alan survives and nearly kills Roger. 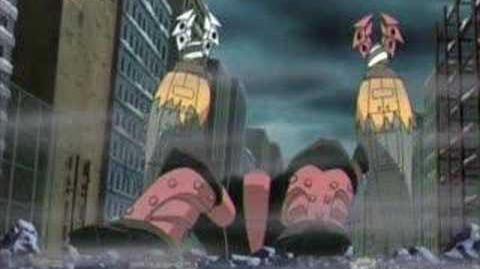