Jason Beck is a criminal and mechanical mastermind in "The Big O".

Beck is introduced as R. Dorothy Wayneright's kidnapper in the series premiere. He is always shown wearing a golden yellow suit or a prison uniform with his signature comb in the breast pocket. His first name is revealed to be Jason in "Twisted Memories".

After being defeated by Roger Smith during the kidnapping case, Beck's further appearances on the show consist of his trying to defeat Roger. However, his plans continually degrade from sinister and dangerous to almost comical in nature. He also seems to have numerous memories relating to the operations and abilities of the Megadeus, stating in "The Greatest Villain" that he knows about Roger being the pilot of Big O.

While his intentions are dubious, he is known to use Dorothy as the key factor in his plans, including making her a core of his machines. He continuously tries to humiliate Roger after the failed kidnapping attempt. He tries to erase the memories of the Megadeus as these make him feel unpleasant. Beck becomes Alex Rosewater's agent in "Twisted Memories" after Alan Gabriel threatens him with an order of execution, but is unhappy with this situation despite a successful attack on Roger. Thus, he betrays Rosewater and ends up aiding Roger in the last episode by telling Dorothy how to activate Big O's Final Stage.

Beck, by nature, is a complete jester. He takes any interaction and gives it a comic slant. He's also shown to be very eccentric and outlandish, even down to the way he dresses. Every time he appears, he's jovial, maniacal, and overly sarcastic to a fault. He enjoys exploiting his enemy's weaknesses and personally interacting in his own plans. He's always seen commanding two henchman to aide in his schemes. Beck will do almost anything to make a quick buck including kidnapping, sabotage, grand larceny, and impersonation to name a few.

Since the beginning, Beck has been shown to possess a tremendous mechanical inclination. He has the ability to design, construct, and operate a Megadues, even going so far as to hotwire R. Dorothy Wayneright as a power curcuit to control Dorothy-1. He has also shown an affinity for creating custom gadgetry to control androids, creating imitatation humans, designing fully operational mechs, and even disabling a sophisticated security system with only crude tools and materials. However advanced, his inventions usually fail dramitically due to some design flaw.

His betrayal of Alex Rosewater and his final appearance, which he sarcastically laughs when Big O surfaces after being dropped into the sea, might indicate Beck is consistent on trying to "ridicule the whole show". "The show" refers to Dan Dastun's view on Paradigm City being an orchestrated show. It means Beck might know he was assigned to be comical relief and was unhappy about it, and therefore resorts to foiling the show and corrupting Roger's stance as "Professional Negotiator" while complying to the comical behavior. His dissatisfaction on successfully helping Alex might stem from when he was developing the plot unintentionally. It is unknown if Beck truly wants to help Roger by telling Dorothy how to activate Big O's Final Stage, but its apparent result of breaking both Big O and Big Fau and subsequent appearance of Big Venus may be desired, which might link to his desire to "erase the memories of Megadeus".

Beck returns in "The Greatest Villain"

Beck as he appears in the Manga 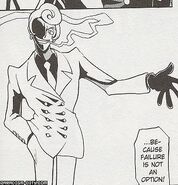 Beck as he appears in the Manga